George Kristian Haffner arrived in England in 1879 at the age of 16 years and went to work for his uncle in Carlisle who already had a well established pork butcher’s business. In 1889 he opened his own pork butcher’s shop in Burnley accompanied by his wife, Karoline Rummler, another German immigrant who he married in Carlisle, and their first born son George Christian Alexander Haffner (the grandfather of John Haffner, the present managing director in the firm). 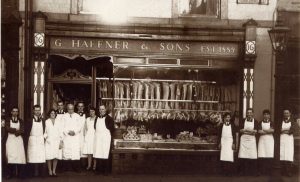 in cotton weaving was about to take off, as indeed is exactly what happened. Helped by his large family the enterprise prospered as the industrial population grew. Their first shop was at 33 Yorkshire Street and then to larger premises at 16 Yorkshire Street, where the other children were born (11 children in all) though 2 died in infancy. Four sons went to Burnley Grammar School and 3 of them (George, Billy and Harry) entered the family business. Three daughters went to the High School.

At the outbreak of World War One the 3 brothers were in the Army. Billy and Harry in the Middlesex Regiment and George in the East Lancashire Regiment where he served in the Dardanelles and on the Somme, being awarded the Belgian Croix de Guerre and Military Medal in 1918 for bravery in the field. George’s tunic and cane were presented to The Queen’s Lancashire Regiment Museum in Preston, Lancashire by his son Raymond in 2007 and they are on display in the World War 1 Somme Room. You can read about the tale of the tunic here.

A major factor of the business was due to meeting a community need in providing tasty, cheap and convenient food from a convenient location. Another major factor was the use of family labour (9 adults) living over the shop and working long hours. In June 1960 due to the building of the Keirby Hotel and the widening of Yorkshire Street, the business moved to 4 Church Street. George Wilkinson Haffner joined the firm in 1935 and after serving in the Army from 1939 to 1945 continued as a director and partner all his working life. He was joined by his brother Raymond in 1944 who, after serving in the Royal Marines, continued as a partner. As the 3 second generation brothers retired George and Raymond became the two directors. It was during this period that the additional retail shop situated in the old Burnley Market Hall was acquired and the Bakery was established. In 1970 due to the development of Keirby Walk, subsequent to the burning down of the Empress Ballroom, another move was made (this time only a few yards) to our present location in Keirby Walk. On completion of the new Market Hall that business was also transferred into the new building and the Bakery premises was also relocated to Clarence Street. Because of housing development and demolition in the Burnley Wood area the Bakery moved again in November 2004 to Marlborough Street. After all this upheaval of premises it must be said that not one day of trade was lost, sometimes the staff and other tradesmen would work all weekend and even overnight to complete the move of machinery and equipment.

Raymond Haffner retired in 1997 and his son John continues the family business.

It is interesting to note that the seasoning recipe for the sausages we make today is exactly the one brought to England from Germany by John’s Great Grandfather in 1879. (If you can’t improve it – don’t change it!)